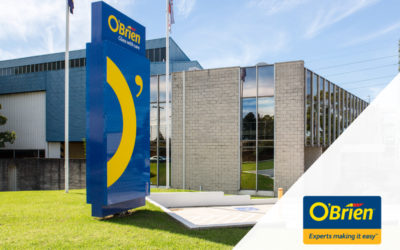 For Australia’s O’Brien, improving data management meant not just replacing a decades-old system but also
adopting a system that would meet the challenges of tomorrow as well as today

O’BRIEN – Australia’s Go-To for Emergency Glass
When they hear the sound of breaking glass, the first thing most Australians do is reach for the phone and dial O’Brien. Established in 1924, O’Brien quickly grew to become the country’s largest replacement glass specialist. In 1971, it became part of the Belron group, which operates glass repair and replacement services in 34 countries, including the UK and Ireland’s familiar Autoglass brand and Carglass in many other European countries. These days, O’Brien is open 24/7, providing replacement glass for vehicles as well as homes and businesses, across its two divisions. With a history of excellent customer service and a desire to innovate, O’Brien has become synonymous in Australia not just with speedy replacement but also with making all glass-related insurance claims simple, straightforward and worry-free.

Upgrading for Today…And Tomorrow
Most organizations groan about being held back by legacy systems yet few of them operate anything that qualifies as a museum piece. “Our old legacy platform was built on Unix!” says Kerry McRae, BI Team Leader & Stream Lead at O’Brien. “Not quite punch cards but close enough to it. It was character-based, no graphical interfaces – that’s how old it was.” Over 25 years old and running outdated software custom-built by staff who were no longer with the company, O’Brien’s Enterprise Resource Planning (ERP) system had reached the point that it could no longer be fixed or repaired. Three years ago, the company embarked on a project to replace it with a Microsoft solution – Dynamics AX and CRM – while at the same time finding a Business Intelligence (BI) solution that could provide insight into the increasing complexities of the market.

“There are many different kinds of Automotive glass,” explains Kerry. “For example, in Australia, a Holden Commodore is quite common and the manufacturer used the same windscreen for a number of models over many years. But then you have one-of-a-kind windscreens for Ferraris that O’Brien occasionally needs to source. And most manufacturers are now coming out with windscreens that have very specialized technology built onto them, such as driving assistance technology and cameras. These need specialist calibration after they’ve been fitted. So it goes from very common to extremely specialized.”

In order to better manage, understand, visualize and analyze the data that comes with this kind of complicated supply chain and sales model, it was decided to look for a new BI solution that would complement Dynamics AX and CRM. In other words, after decades of changing nothing, O’Brien was on a three-year mission to change absolutely everything…all at the same time.

The TimeXtender® Solution
“Choosing TimeXtender came down to ease of implementation, cost and the all-important, ‘Can it work with the ERP that we were implementing?’ factor,” says Kerry. “We also looked at other software, to see how that would stack up in terms of ease of implementation. But it was quite an easy decision to go with TimeXtender.” As it is compatible to run with O’Brien’s Microsoft systems, it sped up the
process significantly. TimeXtender staff initially worked on-site at O’Brien, allowing staff training to run side-by-side with the start of the implementation. “The project was extremely challenging for the whole company,” says Kerry. “O’Brien has never implemented such a big technology project like this, ever.”

• Independence and speed – “Changing the old BI model was slow, difficult and costly,” notes Kerry. “We’d often had to go out-of-house because the Data Warehouse was hand-built by a consultancy, so we’d spent a lot of money every time it would fall over. Instead of waiting a week to fix things, with TimeXtender, I can make a change within 30 minutes – it’s that quick and easy.”

• Continuity of service – O’Brien’s legacy data lives on within TimeXtender even though the old platform is no longer running.

• Future-proof – Because the BI solution is scalable, there are no longer any technological limits to the expansion of the business and the data estate is well setup for future cloud migration.

Speedy, Secure and Future-Proof
After a three-year journey towards a new ERP system, O’Brien’s new data infrastructure went live. Considering it’s a completely new system made up of so many interlocking applications, it’s been a great success.

“There are many benefits but they nearly always come back to speed and data quality,” says Kerry. “Speed of development, ease of implementation, the ability to pull the data through faster and helpful, speedy, after-sales backup have all validated our decision to
choose Timextender.”

How Dacapo uses critical data to grow and expand.

Municipality of Weert boosts effectivity with TimeXtender and Power BI